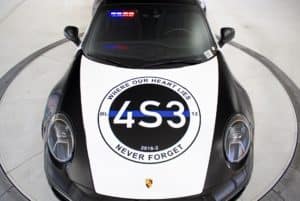 Sergeant Ron Helus was killed during the mass shooting at the Borderline Bar & Grill when he and another officer were the first law enforcement officials to arrive on scene responding to an active shooter call. Sgt. Helus died a hero protecting his community. He served the department for 29 years and was looking to retire in the next year or so. He is remembered by his wife and son.

This campaign was inspired when General Manager Keith Goldberg of Rusnak/Westlake Porsche looked out onto the showroom floor and saw a brand new 2020 White 911 Carrera and remembered the hero badging on the back of police units in Ventura County. He thought to himself, “What if we can develop a Porsche into a Ventura County Sheriff unit in the honor of Sgt. Helus and use that vehicle for fundraising?” Meetings were arranged with the Ventura County Sheriff’s Foundation, the project was approved and the plan was set in motion.

Porsche Cars North America loved the campaign and agreed to cover the cost of the conversion wrap. Rusnak/Westlake Porsche teamed up with Ghost Shield Film located in Thousand Oaks, CA to design the project. Ghost Shield Film wrapped a black 2020 Porsche 911 in honor of Sgt. Ron Helus and his heroic actions. The car wrap mirrors a Ventura County Sheriff patrol car and has several sentimental features and personal remembrances of Sgt. Helus on the vehicle including his name on the driver’s side, his call sign (which is now retired) and the call numbers of the actual unit he was driving on his last shift. When the car was completed, Ghost Shield donated their labor and material costs at no charge. This allowed the dealership to take the $6,000 donation from Porsche and contribute it entirely to the Ventura County Sheriff’s Foundation for additional officer training.

Please join us in honoring Sergeant Ron Helus and this great cause. We encourage everyone to share photos when they see the car in the community and use #ronhelus and #hero911. Spread the word.

Subscribe to receive the latest news and exclusive offers. No spam.